My previous post recommended a website devoted to baseball in World War Two. One link on this site honors all who died in the war. The post lists every man who fell, from the major leagues down to the collegiate level. Just to give you an example of this fine tribute site, I am posting a memorial to one of the two major leaguers to die in the war. His name was Elmer Gedeon . His story follows: 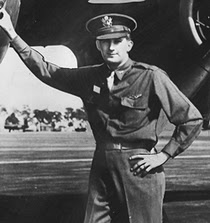 Elmer Gedeon was born April 15, 1917 in Cleveland, Ohio. He died April 20, 1944 near St Pol, France. One of only two players with major league experience to be killed in World War II.

After a collegiate career at Michigan, Elmer played 67 games in the minor leagues and joined the Washington Senators at the end of the season. His first major league appearance was on September 18, 1939 as a late-inning replacement in Dutch Leonard's 19th win of the season against the Tigers. The following day, Gedeon was the starting centerfielder, collecting three hits in a 10-9 win against the Indians. He would appear in five games before the year was out – four in centerfield and one in rightfield – and collected three hits in 15 at-bats.
In 1940, Gedeon shuttled between the majors and the minors, spending most of his time at Charlotte, NC where he hit .271 in 131 games.
He received his summons for military service in January 1941, and instead of going to spring training, instead reported to Fort Thomas, Kentucky.
Around Memorial Day, 1941, Gedeon transferred to the Air Force. He earned his pilot's wings and a commission as a second lieutenant at Williams Field near Phoenix in May 1942, and trained with the 21st Bomb Group at MacDill Field in Tampa. His life almost ended before he went into combat. On August 9, 1942, Gedeon was the navigator in a North American B-25 Mitchell medium-sized bomber that crashed on take off and burst into flames at Raleigh, North Carolina. Gedeon, suffering three broken ribs, managed to free himself and crawl from the wreckage, then realized a crewmate – Corporal John R Barrat, who had suffered a broken neck and two broken legs – was still inside. Gedeon went back in the burning plane and pulled Barrat free. Two men were killed in the crash and the five other crew members all suffered serious injuries – Gedeon was hospitalized for 12 weeks suffering from broken ribs and burns to his back, hands, face and legs, some of which needed skin grafts.

In July 1943, Gedeon began training on Martin B-26 Marauders at Ardmore AAF base in Oklahoma. On April 20, 1944, just five days after celebrating his 27th birthday, Gedeon piloted one of 30 B-26 Marauders that left Boreham to bomb German construction works at Bois d’Esquerdes. It was the group’s thirteenth mission. Gedeon’s bomber was severely hit by flak over France on the way to the target. “We got caught in searchlights and took a direct hit under the cockpit,” says a fellow crewman. “I watched Gedeon lean forward against the controls as the plane went into a nose dive and the cockpit filled with flames.” 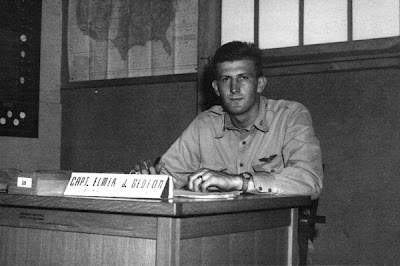 This airman was the only crew member able to escape by parachute as the bomber plunged to earth carrying Gedeon and five others to their death.

Gedeon was reported missing in action, and it was not until May 1945 that his father, Andrew A Gedeon, received word from his son's commanding officer that Elmer's grave had been located in a small British army cemetery in St Pol, France.

Elmer Gedeon's body was later returned to the United States and rests at Arlington National Cemetery in Virginia. He was inducted in the University of Michigan Hall of Honor for track and baseball in 1983.
"He was a superior gentleman," recalls Taaffe, "with a delightful sense of humor." The 394th Bomb Group's historian, J Guy Ziegler later wrote that Gedeon "was one of the most popular officers in the group."

Thanks for your special tribute. This is a cousin of mine.

Thank you for the memories. One of my uncles was a crew member in the plane and died with Elmer.