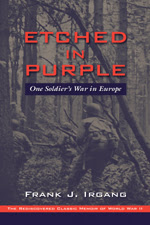 The new Potomac edition of Frank Irgang's 'Etched in Purple'--in my opinion the best WWII memoir ever written---is now available in the Potomac Books catalog.

Etched in Purple
One Soldier's War in Europe
Frank Irgang

“Pulls no punches in painting the life of a combat infantryman.” —Detroit Free Press

“One of the most brutal war books published. . . . Frank J. Irgang . . . has succeeded in doing what at least one million others who served with the infantry during the war wished they could have accomplished. He has told the story of the war simply and plainly as it is seen through the eyes of a combat infantryman. . . . Never once does the author let reader attention slip.” —Los Angeles Times

“A taste of the brutal truth.” —Cincinnati Enquirer


First published in 1949, Frank J. Irgang’s personal record of his unforgettable experiences as a combat infantryman during World War II has its beginning on the dawn of that famous “longest day” when Allied troops set foot on Normandy beaches. We know the surface facts of that invasion—what was planned, how it was executed, and what happened—but what most of us don’t know are the thoughts of those brave men who fought their way across France and into Germany.

What were they thinking? How did they meet the terror of each new day?In this revealing look at a young American soldier’s European tour of duty, the inner facts we have wanted to discover are found.

And they are revealed truthfully and with a freshness of reality that would be impossible to recapture unless the observations had been jotted down, as they were, soon after the events took place. Irgang’s keen eye, his unliterary terseness, his sometimes blunt way of stating brutal truths—all these contribute toward making this book more than one man’s record of the war. In its unpretentiousness, Etched in Purple says vividly and powerfully what hundreds of other soldiers would have said had they found a means of expression: that World War II would always be etched in purple in their memories.


About The Author:
Dr. Frank J. Irgang is a retired professor of industrial studies who taught at San Diego State University for twenty-six years and served as department chairman. He resides in San Diego.
Posted by r morris at 2:42 PM