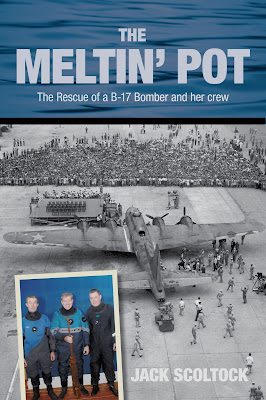 This writing job never ceases to surprise and fascinate me. A few months ago, I got an email from a fellow writer in Northern Ireland named Jack Scoltock. Jack is a well-known author of children's books in the UK and also a diver. He emailed me to let me know he was finishing up a book about his dives to a sunken B-17 bomber named 'The Meltin' Pot', which sank in the Lough Foyle on the way to England in 1942.

I was friends with one of the crewmen, a gentleman named Lee Kessler, whom I wrote about in my book Untold Valor. Lee had the dubious distinction of having survived four plane crashes in his Air Corps career. One was stateside during his training as an aerial gunner and it killed the pilot. The second was the dangerous ocean ditching of 'The Meltin' Pot' off the Irish Coast. All aboard survived but spent hours in the frigid waters. The third crash totaled the crew's replacement B-17 after a mission, and the fourth resulted in Lee becoming a POW in Germany. It was during his time as a POW that Lee survived the infamous forced winter march and witnessed a war crime that he turned into an internationally acclaimed piece of Holocaust art.

Jack is putting the finishing touches on a book about the underwater discovery of the Meltin' Pot. I for one am excited to read it. The book is due out in June.

When I visited Lee Kessler at this home in Canton, Ohio some years back, he told me that the plane had been discovered, and he was hoping to fly over to Ireland to meet with the divers who'd found it. Sadly, Lee passed away only a few months after we talked, and never got a chance to see the plane that had carried him and the rest of the crew safely across the Atlantic, only to ditch in the sea.

Jack wrote me: "Did you know that Charles Pappy Grimes, who was on Lee's original crew of Meltin' Pot, played saxophone or relief saxophone for Tommy Dorsey before he was called up. That's why there are 120 Tommy Dorsey records and a record player on board the Meltin' Pot. Yet to be salvaged."

The tentative cover of the book is shown here, and I'm also giving Jack's personal website in case anyone wants to order a book or has a question about the recovery of the aircraft.

Here is the weblink for Jack's writing website: http://www.jackscoltock.com/ 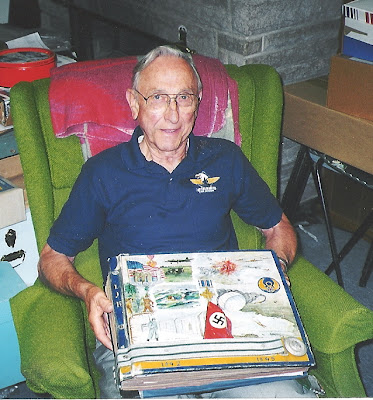 The photo above, which I took in Lee's home, shows Lee holding the cover of his wartime scrapbook. If you look closely, you can see a painting of the ditching of the Meltin' Pot near the middle. The book's cover is decorated by paintings depicting Lee's many experiences in the war. It was held shut by a captured German belt and buckle. The belt is blue and white and runs across the bottom of the book, and the buckle is circular and silver at the right of the book.
Posted by r morris at 7:53 PM

In my various books on jazz I can find no mention of Charlie Grimes being with Tommy Dorsey on record, which doesn't mean to say he didn't play with TD's band. I have found him recording with the Georgia Gigolos in 1929, accompanying Lizzie Miles, the blues singer. I also found a mention of him recording with the Jungle Town Stompers also in 1929. He was an alto and tenor player.

That looks like a fascinating book which I am looking forward to reading. Please keep us informed as to when the book can be pre-ordered!