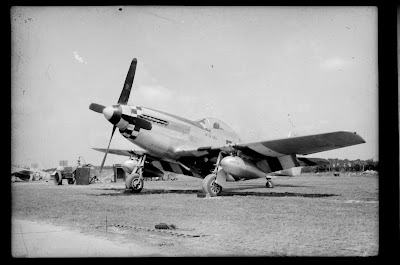 I found an old negative inside a P-51 Mustang pilot's photo album. It had been tucked loosely inside the album and was in rough shape. No business in Idaho Falls has the capability to restore a negative, but fortunately, I have a friend who can digitally restore it.

I believe this photo to be of the P-51D Marinell, flown by a gentleman who lives in Idaho Falls. He scored three aerial victories in her during his tour. Another pilot was flying her and crashed in France in 1944, killing the pilot. The plane was wrecked but not totally destroyed. It ended up in a scrapyard until a wealthy British hobbyist bought it and restored it a few years back. It is now flying again.
Thanks to JG McCue for the restoration. Please feel free to use this rare old photo, available for the first time ever.

See another old photo of this plane here.

Read about Marinell here.
For more posts about how I found out about this plane and pilot, just enter Louey or Marinell in the search box on the blog, upper left.
Posted by r morris at 7:11 AM 1 comment: 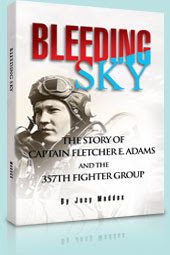 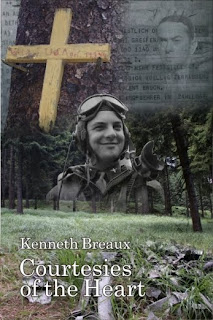 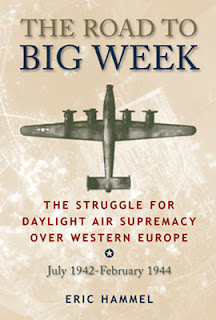 Books I've read in the last two weeks. All very highly recommended. Reviews to follow in short order.
1. Bleeding Sky: The Story of Captain Fletcher E. Adams and the 357th Fighter Group, by Joey Maddox.
2. Courtesies of the Heart, by Kenneth Breaux.
3. The Road to Big Week, by Eric Hammel.
Posted by r morris at 6:43 AM No comments: