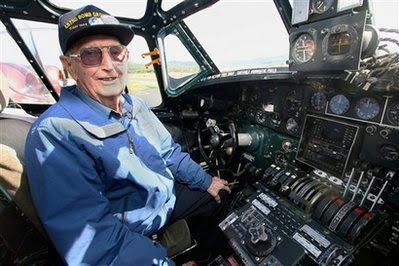 World War II pilot Bernerd Harding, 90, smiles inside the cockpit of a B-25 in Laconia, N.H., Friday, Sept. 25,2009. Harding was a pilot when he was shot down 65-years ago while flying a bombing mission over Germany.(AP Photo/Jim Cole)

By NORMA LOVE, Associated Press Writer Norma Love, Associated Press Writer – Fri Sep 25, 5:19 pm ET
MANCHESTER, N.H. – World War II pilot Bernerd Harding feels he finally has completed his mission — 65 years after his B-24 airplane was shot down over Germany.
Harding, now 90 and being treated for prostate cancer, was a passenger Friday in the Witchcraft — the last B-24 still flying. He sat in the cockpit behind the pilots. The skies were clear during the 30-minute flight from Laconia to Manchester that ended with a safe, smooth landing.
"It was fun. It was worth it. It's history," he said after the flight.
As the four engines rumbled to life, Harding was taken back to another time — back when he was a 25-year-old first lieutenant piloting a bombing run to Bernburgh, Germany. On the way back to his base in England, fighters crippled his plane, forcing him and his crew to bail out with their parachutes.
Harding waited for the others to jump, then turned and saluted a German fighter pilot for not blowing up the plane with the men inside.
"He flew alongside to make sure I jumped out," Harding said.
Harding said he felt that mission — his 14th — was incomplete without one more landing. Friday's was "close enough," he said.
Harding's B-24, nicknamed Georgette, was shot down a month after the D-Day invasion of Normandy, on July 7, 1944. One member of Harding's crew was killed. The others — including Harding — were taken prisoner.
Harding landed in a freshly cut wheat field, barely missing a barbed wire fence. Three farmers, two with pitchforks and one with a gun, captured him and herded him into a cellar in Klein Quenstedt (klyn KWEN' -shted), a village southwest of Berlin. Fearing reprisals from villagers for being a bomber pilot, Harding buried his pilot's wings in the cellar floor.
Two weeks ago, Harding returned to Klein Quenstedt to search for the wings with villagers' help. He didn't find his wings but a resident gave him a silver bracelet recovered from the body of a dead American airman that day. The bracelet belonged to Jack H. Glenn and is being returned to his sister in Anchorage, Alaska. She plans to send it to a museum in Texas where Glenn grew up.
The Collings Foundation, which owns the Witchcraft, presented Harding with a new set of pilot's wings after Friday's flight.
That wasn't Harding's first time inside the Witchcraft. He toured the bomber about 10 years ago with his grandchildren but didn't fly in it, so this time it was a treat.
"He says, 'I'm making my last landing.' In light of the cancer, what a gift," said his wife, Ruth, 84, who rode in the B-24 on Friday.
Harding's only complaint about the flight is that he couldn't see outside the plane much.
"I was watching them in the cockpit," he said.
It took a friendship, bonded across a generation, and a mutual interest in the war to pull off Friday's special flight.
Two years ago, Harding met Bob Korkuc, who was writing a book about his uncle's death aboard a B-17. Korkuc had noticed Harding's POW license plate and asked if Harding was a ball turret gunner, since Harding was short enough to fit into that part of the plane. Harding told Korkuc his story and Korkuc asked if he could research it for another book. Their talks cemented a friendship.
Last October, Korkuc decided to help Harding travel to Germany find his wings and land in a B-24 again. Korkuc called the Collings Foundation and arranged for Friday's flight. Korkuc, 47, of Amherst, also helped arrange Harding's trip to Germany.
Harding of Milford, N.H., was also accompanied on the Friday flight by his son Brian Harding, 53, of Milford, and Korkuc. The Associated Press also was on the flight.
The Witchcraft is in New Hampshire as part of the Collings Foundation's Wings of Freedom Tour. The foundation, based in Stow, Mass., offers tours of military planes as well as flights aboard the aircraft.
___
On the net: http://www.collingsfoundation.org/menu.htm
Slideshow:Ex-POW returning to Germany to dig up pilot's wings
Posted by r morris at 5:47 PM No comments: 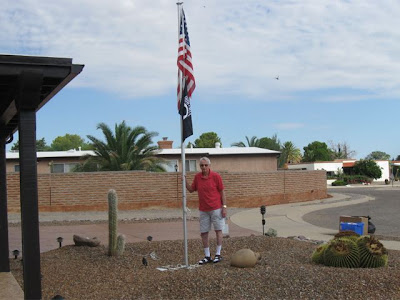 You can't keep a good man--or a good flag--down. Dan Culler with his repaired Prisoner of War and American flags yesterday, September 8.
Posted by r morris at 6:08 AM No comments: 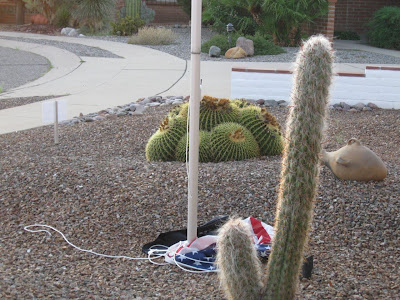 If this doesn't make you mad, nothing will. I am posting this email from my friend Dan Culler, who was a B-24 flight engineer in WWII and endured several years of torture as a Prisoner of War. His American flag and his POW flag were cut down by vandals. 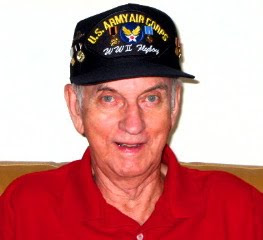 "To all Americans,
Some time last night, this is what some vandals did to my driveway and cut down my American and POW/MIA flags letting them lay on the ground. If this is what happens in retirement Green Valley, Arizona, GOD have mercy on the rest of America. This 85 year old man spent the morning on his hands and knees trying to get some of it off, but I'm afraid my new driveway is ruined. I'm very much upset about the drive way and garage door but mad as hell about my flags. I was in WW11 and Korea and a POW and is this the thanks I get. This is the only time I have asked anyone to pass anything along the internet, but please do. Dan "
Posted by r morris at 6:35 AM 2 comments:

The following are drawings by Paul Dillon, a friend of mine, and we are hoping to use them in the upcoming book about the 95th Bomb Group. Paul's dad, Red Dillon, was a ball turret gunner on in the 95th, as well as a POW. 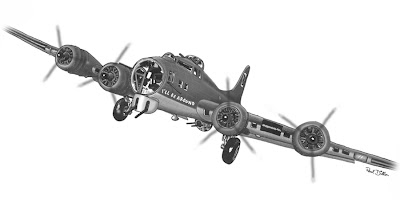 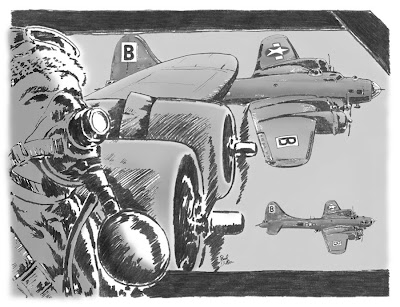 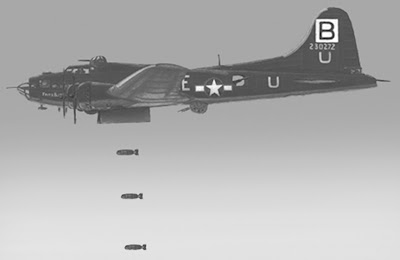 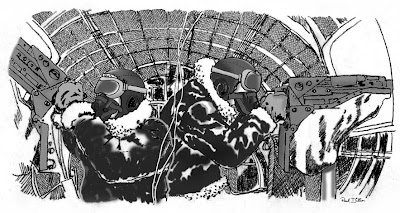 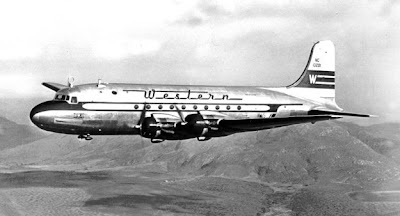 This was sent to me by my friend Jay Buckley. I can't improve on the way he tells the story of three WASP lady pilots that he knew. The stories are funny and reveal the tough character of these women.
"I knew three gals that were WASP's.
Billie Jo Reid was the wife of one of the original owners of the McDonald franchises in Denver. As I believe he had 19 outlets. Billie Jo flew in several 99 races sponsored by her husband Carl. She also flew the company King Air.

The other two were Pat Sullivan and Betty Clark. After the war they started a crop dusting business in Steamboat and moved to Rifle, CO. Betty was from Rifle and there was more business there and in Grand Junction. They operated out of both areas.

Betty did most of the flying and Pat ran the loading, office operations and field scouting. In 1970 I took my plane down to help Betty out for few days, it turned into an all summer contract flying both out of Rifle and Grand Junction.

Betty and I flew back up to Rifle one evening as Pat had said we had some alfalfa fields to scout and spray. These were big fields, 40 acres. The fields in Junction were 5 and 10 acre patches, yank and bank type, power lines and houses.

We met the farmer out in the field that evening to inspect the insect damage. There was plenty of evidence of alfalfa weevil feeding and damage. Pat came running up to us and showed the farmer a handful of weevil. The farmer took one look and said they were all dead, got in his pickup and drove away.

Pat had collected some weevil from a pasture near the airport and put them in an aspirin bottle. Wanting to convince the farmer he had a problem, she shook the weevil out in her hand to show him. Sure enough they were dead, the aspirin had killed them. We lost the job.

Betty and Pat have both passed away. I'm not sure about Billie Jo, I haven't seen her since 1976 and her health was not good then.

One more story about Betty. A United DC-4 was flying from Denver to Grand Junction and lost an engine somewhere east of Rifle and another engine was miss firing so the pilot elected to set the plan down at the Rifle airport. The runway was pretty short but he got in stopped before going off the west end.

Betty and the mechanics sat around for a bit that evening having a toddy or two and Betty told them if they would replace the two engines they could fly the "damn thing" out of there. We after many phone calls to United in Denver it was decide it may be possible.

The two engines were replaced and a crew showed up to fly the plane to Grand Junction. After walking the runway, doing some calculations the crew said there is no way they would try to fly the plane out even with minimum fuel. There were more calls to Denver between the mechanics, pilots and operations explaining the situation.

Betty had about all she could stand and said she would fly the "damn thing" out of there for $500 and she didn't need a crew only someone to raise and lower the flaps and the gear and if they couldn't find someone she could even do that.

It was agreed to give it a try. They pushed the plane to the far end of the east edge of the runway. The main gear was just on the runway, most of the fuselage was overhanging a ravine at the end of the runway.

Betty and one of the mechanics that volunteered stood on the brakes while she ran the engines up to maximum power. The plane was literally jumping up and down. She released the brakes and roared down the runway. About two thirds of the runway, the plane was air borne. The flight was uneventful to Grand Junction.

A few days later Betty received a phone call and a letter from the CAA, the predecessor to the FAA, about the flight. She wasn't rated in a DC-4, inadequate crew members and so on. She hung up on the guy and filed the letter where we filed most of the letters from the feds. Betty had ferried B-17's so she was no stranger to four engine aircraft.

Sorry about the rambling Rob, but those were three gals I real admired.