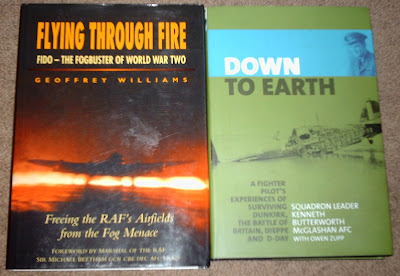 I've picked up a couple of very interesting books in the past two weeks. The first, Down to Earth: A Fighter Pilot's Experiences of Surviving Dunkirk, The Battle of Britain, Dieppe and D-Day, is by Squadron Leader Kenneth Butterworth McGlashan, AFC, with Owen Zupp. I found out about this book during a history discussion on Amazon, and became acquainted with the co-author, Owen Zupp, an Australian pilot for Quantas Airlines who shares my passion for aviation and aviation history. Owen and I traded books by mail. The book was published by Grub Street Press, London in 2007. Owen conducted many interviews with the late Mr. McGlashan to write this outstanding account.

McGlashan started his RAF career in 1939 in a Hawker biplane, and ended it in the jet era of the 1950's. Shot down over the beaches of Dunkirk in heated aerial combat, McGlashan returns to England to fly again. He flies in support of the ill-fated invasion at Dieppe and takes on clandestine night operations before D-Day.

The second book I picked up at a used book store. It is entitled Flying Through the Fire: FIDO--The Fogbusters of World War Two: Freeing the RAF's Airfields from the Fog Menace by Geoffery Williams. This book, published in 1996 by Grange Books, London, chronicles the British attempt to control the fog and low clouds that caused many Allied aircraft to crash upon return to base. Early in the war, many British bombers returned from harrowing missions unable to find their bases, which were completely fog-bound. This took a savage toll on aircraft and aircrew. Winston Churchill prompted the government's Petroleum Warfare Department to develop a cure for this problem, and they came up with FIDO--Fog Investigation and Dispersal Operation. Lines of burners feulled by thousands of gallons of petrol were installed beside runways to literally burn off the fog, thereby allowing aircraft to take off and land safely. Over 100 photos accompany this fascinating book.

And on that note, Happy New Year to all readers. I look forward to many postings in 2008, and will be working on two books in the coming year. First, the 95th Bomb Group history, and second, a sequel to Untold Valor tentatively entitled Untold Valor: Forgotten Stories of Aerial Combat in the Pacific.
Posted by r morris at 9:02 AM