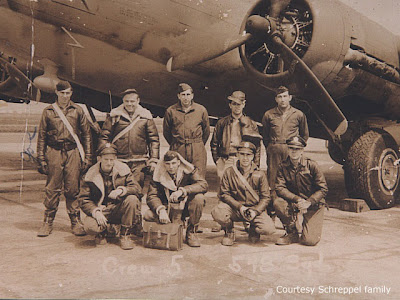 The crew of the 'Jolly Roger', of the 385th Bomb Group. Joe Schreppel is back row, far left.

Scott Nelson of North Dakota wrote me that he is in the process of illustrating a website dedicated to the memory of Sgt. Joe Schreppel of Kansas, a B-17 Tailgunner who is listed as 'unknown' on his grave marker. Scott writes:

"I am in the process, illustrating a web site from Belgium about an airman that was shot down there during the first Schweinfurt (17 Aug 43). He landed in his parachute mortally wounded and was aided by some Belgium Boy Scouts, and he told them his name before he died and that he was from Kansas. German authorities imprisoned several Belgium civilians who had helped and shown sympathy toward this airman. For some reason this airman was buried as "unknown" and even after the war (body was moved to one of the Belgium US Cemeteries) it is still inscribed as unknown. This website's mission is to try and get that changed. My pictures will be up on the site hopefully in the next couple weeks. The site in case you are interested is: http://www.missinginaction.be/"
This site is run by the son of the man who aided the mortally wounded Schreppel after he landed. Schreppel had time to communicate briefly with the young Scouts before he passed away.

This is a very interesting website and I recommend it. I look forward to seeing Scott's artwork on this site. I think his stuff is great. Check out some of his work at his artist website: http://scottnelsonart.com/
Posted by r morris at 8:02 PM