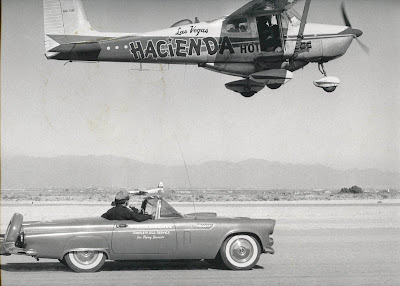 When I was in the Las Vegas Airport, they had an old Cessna 172 hanging from the ceiling over the baggage claim area, so I had to check it out. Amazing. The Cessna, carrying two men, stayed in flight for an astounding 64 days, 22 hours, 19 minutes and five seconds!! Also in the terminal was a beautiful Ford T-Bird that was used as a rescue car in the fifties, and also assisted in the endurance record. You just never know what you're going to find that's interesting during an eight-hour overnight layover in an airport terminal.

Air and Space Magazine's Roger Mola wrote in an article in July 2006:

"On December 4, 1958, Bob Timm and John Cook set out from Las Vegas’ McCarran Field in a (Cessna 172) Skyhawk painted in the neon logo of the Hacienda Hotel to raise money for cancer research. The pair set an endurance record that still stands, staying aloft for 64 days, 22 hours, 19 minutes, and five seconds. The pilots flew in four-hour shifts and once a day descended to 20 feet above the desert highway to receive 95 gallons of fuel from a tanker or, occasionally, a classic Thunderbird. In 1959, the Hacienda Skyhawk landed in the Guinness Book of World Records, and now hangs above the baggage claim at what is now McCarran Airport." 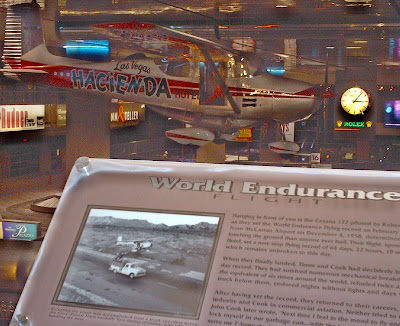 Bob Shane wrote the following article about the classic Thunderbird that served as the unlikely rescue car at Las Vegas Airport in the fifties. This lovely T-Bird is also on display in the airport.

"Thunderbird Once Owned by Howard Hughes Sold at Barrett-Jackson
Mar '06
By Bob Shane
Aviation buffs attending the Barrett-Jackson Collector Car Auction viewed a beautifully restored, fiesta red 1956 Ford Thunderbird convertible with a most unusual career in aviation. Not only was it once owned by aviation legend Howard Hughes, but it also served as an airport crash wagon and was used to refuel the Cessna 172 that holds the world's longest flight duration record. 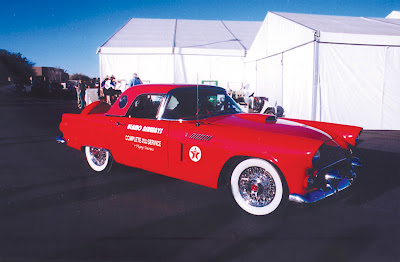 The T-Bird helped refuel a Cessna 172 during a record-setting endurance flight.
"Mr. & Mrs. Aviation," George and Peg Crockett, originally owned the T-Bird. In 1941, George Crockett, a native of Missouri and descendent of Davy Crockett, founded Alamo Airport, a private airport on Las Vegas Boulevard in Las Vegas. In 1948, Clark County bought the airport, and its name was changed to McCarran Field. That was the beginning of the current McCarran International Airport.The Crocketts owned and operated the airport FBO, Alamo Airways. The 1956 T-Bird was used to supplement the airport's fire rescue truck. It was outfitted with a two-way radio, first aid kit, folding stretcher, spotlights and two fire extinguishers. Two large, red and white checkered flags were mounted on the rear bumpers. 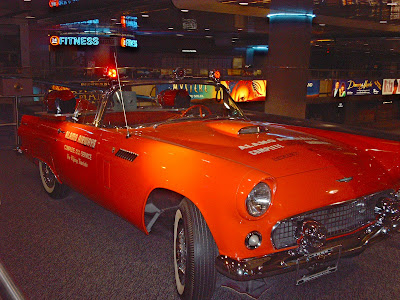 Darrell Bradford, the assistant manager of Alamo Airways, recalled one airport incident where the T-Bird saved the day."A TWA Martin 404 had just departed Las Vegas for San Francisco International, when the pilot declared an emergency and asked permission to return to McCarran immediately," Bradford said. "The pilot shut down the left engine and had been cleared to land on Runway 7. With me riding as passenger, George positioned the T-Bird about 3,000 feet down the 12,500 foot runway." The aircraft made a single-engine approach, flared out high, then bounced three times before the pilot firewalled the right engine and started to retract the landing gear. "The aircraft started to climb out with only the right engine producing power," Bradford said. "It started to the left, right across from us. George said, 'We'd better try to keep with the Martin; he'll run out of runway.'" About that time, approximately 100 feet above the ground, the right wing lost its lift, and the aircraft settled to earth in a cloud of dust.


"The T-Bird was traveling about 70 mph when George left the taxiway and drove onto the desert," Bradford said. "We saw nothing until the T-Bird bogged down in the sand. When the dust settled, we found we were about 50 feet from the left rear of the aircraft. Per Mr. Crockett's instructions, I went around to the right side and George took the left. When I arrived at the right wing, everything was OK. When George arrived at the left wing, he found a small fuel fire, being fed by a ruptured fuel cell."The fire was rapidly approaching the fuselage, which contained 44 passengers. "George extinguished the small fire, thus averting a disaster," Bradford said. "The passengers started pouring out of the aircraft. A full five minutes later, an off-field fire truck arrived on the scene and promptly became stuck in the sand."By the time the proper fire equipment arrived, the fire was out and all of the passengers had been evacuated. "The passengers moved away from the crash scene, leaving the T-Bird the hero of the day," Bradford said. "There were broken bones, sprained arms and ankles. If the T-Bird hadn't taken us to the scene, there might possibly have been 44 charred bodies. All in all, the T-Bird more than paid for itself on that one occasion."

On Dec. 4, 1958, a Cessna 172 took off from McCarran Field on a nonstop endurance flight. On Feb. 7, 1959, 64 days, 22 hours, 19 minutes and 5 seconds later, it landed in the Guinness Book of World Records. The nonstop flight record remains unbroken. The pilots, Bob Timm and John Cook, took turns at the controls of the Cessna, flying it in four-hour shifts. Except for the pilot's seat, everything was removed from the interior. A 95-gallon fuel tank was added, along with a mattress and internal access to both fuel and oil lines.With 47 gallons of fuel in the wings and 95 gallons in the belly tank, the 172 had to be refueled only once a day. The ground crew, Norbie Prada, Doyl Hickman, Roy Young and Bill Marhold, supervised that portion of the refueling. Once each day, the Cessna was flown 20 feet above a desert road. A line dropped to the fuel truck raised a hose up to the aircraft so that 95 gallons of fuel could be pumped into the belly tank. The process took three minutes.When the fuel truck malfunctioned during the marathon flight, Alamo Airway's '56 T-Bird again came to the rescue. While the Cessna flew above the convertible, five-gallon fuel cans were hauled by rope from the car to the plane. The Cessna was able to remain airborne.For the Cessna pilots, sleeping had become a problem. They couldn't sleep on a regular schedule and often drifted off while flying the airplane. Bob Timm admitted that he had dozed off at 2:55 one morning, while flying over Blythe, Calif. Waking up 20 minutes later, he saw the lights of Yuma, Ariz., and realized they had crossed over a range of mountains. Without an autopilot, they may not have made it."Doc" Bayley and the Hacienda Hotel sponsored the flight. Called the "Flight against Cancer," it served as a fundraiser for the Damon Runyon Cancer Fund. Today, the restored Cessna 172 is suspended above the baggage claim area at McCarran International Airport as part of the Howard Cannon Aviation Museum. A replica of the '56 T-Bird is also on display.In 1967, Crockett sold Alamo Airways, and the '56 T-Bird, to his longtime friend, Howard Hughes. The Hughes Tool Company property tag is still attached to the car's firewall. In the mid-1970s, Hughes sold the T-Bird to his personal pilot, John Seymore. In 1981, Seymore sold the car to a boat dealer, who in turn used it as a trade in on a new car from Sunland Motors in Las Vegas. In 1983, John and Marian Vetterli, from Wisconsin, acquired the car. They began restoration work in 1989. The couple sold the T-Bird at the 35th Barrett-Jackson Classic Car Auction for $86,400.

I should have taken a photo of their little portable toilet. Why anyone would put themself through 62 days of air travel is beyond me.