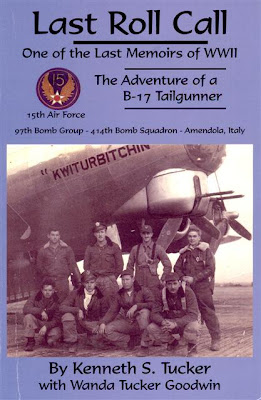 I had the good fortune recently to read a book by B-17 tailgunner Kenneth S. Tucker, who flew with the 97th Bomb Group in the 15th Air Force in World War Two. I also had the pleasure of communicating with his daughter, Wanda Tucker Goodwin, who helped her dad write the book. Though I've read literally hundreds of books about the air was in Europe, I was surprised at how much interesting information was in Mr. Tucker's book that I did not know about.

Most memoirs of the European air war are about the Eighth Air Force, which during and after the war garnered the lion's share of the publicity. A large part of this was simple proximity to those who reported the war. London was teeming with reporters looking for a good story, and the Eighth's bomber boys were only a few miles away. On the other hand, there were very few reporters willing or able to go to Amendola, Italy, and live in the alternately muddy and dusty tent cities there, surrounded by the crushing poverty of the Italian natives.

Mr Tucker covers his life from his early days as a son of a fisherman in Florida, though his training, and into combat in the flak-filled skies over Europe. His writing is clear, unembellished, and honest. He develops the personalities of the various members of the crew as he recounts the missions, so that one feels like one knows the young men on the crew. He also tells of his visits to various places of interest on his time off, such as Pompeii and the Isle of Capri.

Many readers of WWII memoirs are on the lookout for signed memoirs. Here is your chance to pick one up. Follow the link below to Ken's website, and put in an order for a copy of this book. He'll personalize it and autograph it. 186 pages. Soft cover trade paperback. Illustrated with black and white photographs.