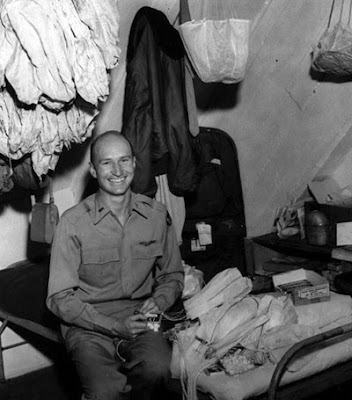 U.S. Air Force 1st Lt. Gail S. Halvorsen's bunk becomes a factory for miniature parachutes weighted with Lyons chocolate during the Berlin Airlift. The idea to drop candy to German children on the approach to Tempelhof Airport grew out of a chance meeting in July 1948 between Halvorsen and 30 German school children at the perimeter fence of the airport. Photo courtesy of the U.S. Air Force.

Today I got a package from nearby Utah from Lt. Gail Halvorsen, USAF (Ret.). It contained a new copy of his book 'The Berlin Candy Bomber: The Story of Uncle Wiggly Wings and the Berlin Airlift". Needless to say I am looking forward to reading it. Lt. Halvorsen was a C-54 pilot during the Berlin Airlift, which took place sixty years ago this month. During the airlift, he began dropping candy to the children of Berlin attached to little parachutes. He became known as the Candy Bomber, Uncle Wiggly Wings, and many other fond nicknames by the children of Berlin, still recovering from the ravages of World War Two.
I highly recommend this book to anyone interested in the Berlin Airlift or in an exceptional gentleman in the true sense of the word. What's more, Lt. Halvorsen will gladly inscribe and sign it for you and throw in the postage. Most of the proceeds go to his charity, so you can feel good AND get a good read.
A very nice website about Gail Halvorsen can be found here: http://www.talkingproud.us/HistoryBerlinCandyBomber.html
Here is information on ordering this excellent, uplifting book:
The book can be obtained from Gail S. Halvorsen,19 E Southfield Road, Spanish Fork Utah 84660 ( 1 many--mid December each year) and 1525 Dove Way, Amado, AZ 85645 (mid December--30 April) , for $20.00 The first edition, published in 1990, was sold out and it was just republished in September 1997 with a new chapter of 28 pages and photos. Indicate in your reply that you are responding to this page and a donation of one dollar will be made by the author, on the sale of each book, to each of the following organizations: Berlin Airlift Veterans Association, the Berlin Airlift Historical Foundation and the Primary Children's Hospital in Salt Lake City, Utah. This offer is limited to the first 1400 books.
Authors note:
The book price has changed from $14.00 to $17.00 due to the fact that the publishers cost has doubled. The original stock of books has run out so to compensate the publishing cost the price has been raised by three dollars. However, the Author ( Gail Halvorsen ) has said he will pay the stateside postage on orders.
Posted by r morris at 4:01 PM