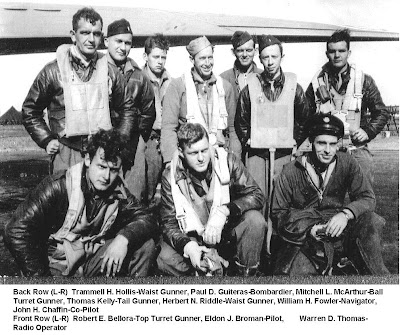 One can see the weariness in this photo of the Broman Crew taken after a mission. John Chaffin stands at right rear. Four of the enlisted men went AWOL right before the Munster Mission, when 'Fritz Blitz' was shot down, and were court-martialed.

One of my first friends back in 1999 when I began research for my book Untold Valor was John Chaffin. Originally from Grapevine, Texas, John became a pilot in the 95th Bomb Group, and flew as co-pilot on the Eldon Broman crew for over twenty missions on 'Fritz Blitz' before being shot down on the Munster Raid, October 10, 1943. He ended up a POW (better known as Kriegies by the men themselves) at Stalag Luft III in Sagan, Germany.
Today I've been working on a chapter for the 95th BG history about POWs, and am using a privately-published book John sent me back in 2000. John had a dry sense of humor, and it comes through in his writing. He was also unfailingly honest in everything, a dedicated Christian to the end. He was a hard-working perfectionist, and his harsh critiques of some of my early writing forced me to dig deeper in my writing and never take the easy way out. But he was also an intensely warm, giving man and when he passed away seven or eight years ago, it left a void that will never be filled.
I laughed as I read his book today, as I could hear him saying the things that are now left only on paper. In his POW chapters, he talks about the importance of food in the lives of the men. There was never enough, even supplemented with Red Cross parcels, but the men came up with ingenious ways of creating tasty dishes, going to great lengths to do so. Some of the kriegies shared favorite recipes. John did, and put some in his memoirs. Here are some snippets from the late, great John Chaffin.
"The Geneva Convention defines the food that is to be supplied to Prisoners of War in terms of minimum calories per day per POW. We could probably have survived on just what the Germans gave us but we would have been very, very hungry all of the time. The rations which we got from the Germans included black bread, potatoes, kohlrabi, carrots, ersatz jam and honey, blood sausage and on rare occasions, fresh beef."
The German rations were supplemented by Red Cross Parcels. These came from various Allied nations and had foods such as powdered milk, chocolate, coffee, cigarettes, SPAM, a dry powdered milk called KLIM, and more. “The Red Cross food gives us variety, keeps us healthy, and does more to make our life bearable….Full rations are one parcel per man per week but we never had beter than one-half rations and most of the time we received only one-fourth the normal allowance.” 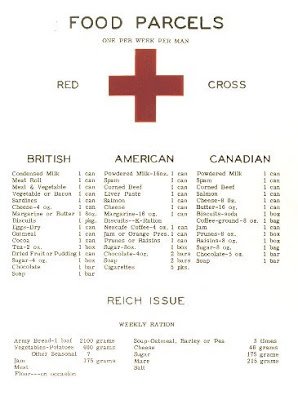 "Early in our kriegie life we did not do too well. Most of these guys had never learned how to cook or plan a meal. A certain number of them had seen in Boy Scout programs and learned how to cook over camp fires and a efw, like myself, had not only the benefit of scouting experience but also a mother who believed that boys as well as girls should grow up with some knowledge of cooking.” 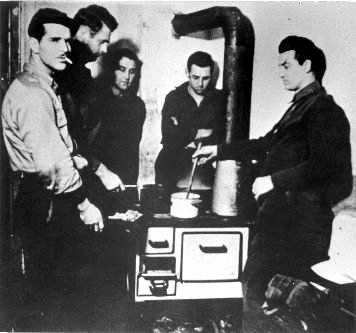 Quiet, please...chefs at work. Conditions were tough as several hundred men had to share just a few stoves.

"Flour was made by crunching up Canadian crackers. No parcels have yeast, so tooth powder, which contains baking soda, is used.

Some of John’s favorite Kriegie recipes:

Pie Crust:--- Grind crackers into a fine powder. Over about ½ bowl of the powder, pour ¼ lb. of melted butter. After mixing this well, add milk until the dough is pliable; then put it in a pan and bake until brown and fully dried out. 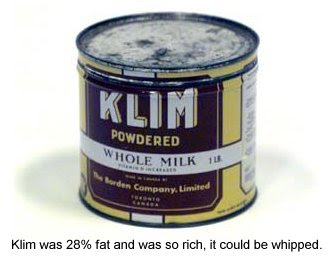 Chocolate Pie:-- (Serves Eight)
Ingredients: one (1) Klim can of milk (dry)
One ‘D’ Bar or ½ can of chocolate
Four tablespoons of sugar
Make pie crust. Shave ‘D’ Bar into a fine powder; mix thoroughly with milk power and sugar; then add enough water to make a thin paste. Boil mixture until it is thick; then pour into a crust and let set until cool. 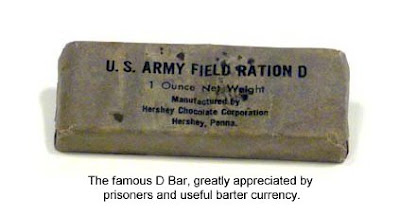 John describes this recipe with his usual dry humor:

Kriegie Cake:
The Kriegie Cake is likened to a sandwich in that it is built and not made. It is not unlike a stew, since almost anything sweet in the pantry can be thrown in.
The bulk of the cake or rather the usual starting point is one bowl of bread scraps. Soak these in hot water for fifteen to thirty minutes and then pour into a dishpan. You are now ready to start.
Throw in about one Klim can of cracker crumbs; add sugar to suit taste—about ¾ lb. should be close to right. Put in ½ can of Nestles milk if you have it handy; a can of any kind of jam helps and ½ can of chocolate powder is one of the few necessary ingredients. A half can of New Zealand coffee doesn’t hurt anything, and, if you like, a box of raisins may be added. An apple pudding or Yorkshire pudding (from British parcels) will help immensely but if you are not fortunate in having one, don’t fret. When you have tired of throwing things into the pan, roll up your sleeves and work at the mess with both hands until it is well mixed. (If it is obvious that there is dirt on your hands and the weather is not too cold to run out to the latrine/washhouse you probably should wash your hands first—especially if any of the picky other Kriegies in your combine are watching.
Work the mess with both hands until it is well mixed. Pour the batch into a buttered pan and bake in the bottom of the oven until done. It should be baked slowly.
Almost any kind of icing will suffice for your cake. If you are lazy or pressed for time (rare even for a Kriegie) a little jam or honey will do. Should you feel more industrious, here are a couple of ideas for your use:
Take ¼ Klim can of milk, three spoons of sugar; mix well then add enough water to make a thick paste. Spread slowly and there you are.
To make a chocolate icing just add cocoa into the already-mentioned mixture and there you are—chocolate!
Some of John’s other recipes, meticulously saved in his POW log, include Barton’s OO—LA—LA Cookies; Blood Sausage Sandwich Spread; Delta Delight; Kriegie Style Grapenuts; and Prune Whip Pie
Posted by r morris at 9:14 AM